Canoe as a shopping basket 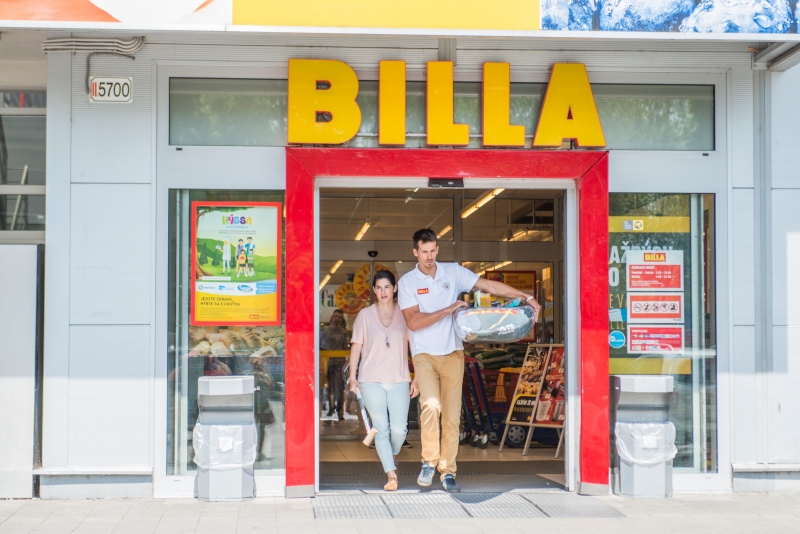 A canoe at the cash register and surprised customers. Canoe slalom racer Matej Beňuš was shooting the second video from the series for his platinum partner, BILLA company. The grocery was at the full service. The fans can see the video not only on the website, but on his facebook funpage as well.

Silver olympic medalist accepted a big challenge this year. He was shooting two videos for his platinum partner, both starring his canoe, but this time in unusual situations. While in the first video, publish in the summer, Beňuš paddled among bread rolls, in the second one he used his canoe as a shopping basket. Since Matej prefers a healthy lifestyle and Slovak products, most of the things he put into his canoe were local products from Slovak suppliers. Because of the length of the boat, the shooting was not easy at all. The scenes were being filmed during the full service of the grocery. The team had to be careful about the customers’ safety, since the handling of the canoe was quite complicated. The size of the boat was the biggest problem.

„I hold my canoe almost every day, I was handling it in many places, but grocery and cash register are really unusual places. The team who came up with these ideas left the final decision to me. I know when it’s safe to handle the canoe, where it fits and where it does not. That was one of the reasons why they had to adjust their original idea when I came to the grocery,“ says Matej Beňuš.

Canoe as a shopping basket

The shooting of the second video took about 45 minutes. In comparison with the first one, it was easier from the technical point of view. The silver olympic medalist “only” put his boat on the moving belt of the cash register, and after scanning the goods, he took it out of the shop. „I have to admit that as in most families, my wife does most of the shopping. She chooses mainly Slovak products. She always knows what I like most. I shop mostly when she forgets to buy something and calls me, asking me to stop by at a grocery when going home from the boathouse. We were shooting both videos at the same time, it took about three hours. It was my longest stay in a grocery during the last years,“ says Matej Beňuš with a smile on his face.

Video for the fanpage

The video, in which Beňuš puts the goods into his canoe, can be watched not only on the website, but also on Matej’s facebook fanpage.

„We are happy that we are continuing in collaboration with Matej, it’s the second year already. Besides being a great canoeist, he is also an role model of a healthy lifestyle. That is in compliance of our company’s strategy. We are more than happy that he actively participates in supporting the local suppliers,“ says the BILLA Slovakia marketing director, Denisa Pernicová. The BILLA company supports the reagional procucers in the long term. The “Slovak farm”, launched in 2013, can serve as an example. This year they introduced specific farmers and producers who are behind the “Slovakia farm” products, and are a guarantee of 100% Slovak origin. „In November, we launched a project “BILLA regional suppliers” in Bratislava and Spiš region. Step by step we will spread it across Slovakia. We appreciate Matej’s activity in this campaign. The video is very resourceful and funny at the same time. That’s one of the reasons why we support a good Slovak sportsman who is representing our country. We will continue in cheering for him while he makes his Olympics dream come true,“ added the BILLA Slovakia marketing director, Denisa Pernicová.

The shooting was done during the full service of the grocery shop. It took place in the BILLA headquarters on Bajkalská street in Bratislava.

Numbers from the shooting:

2 number of the videos Matej was shooting

3 hours was the time it took to shoot both videos

10 kilograms is the wight of the Olympic medalist’s canoe