In canoe among bread rolls and fruits 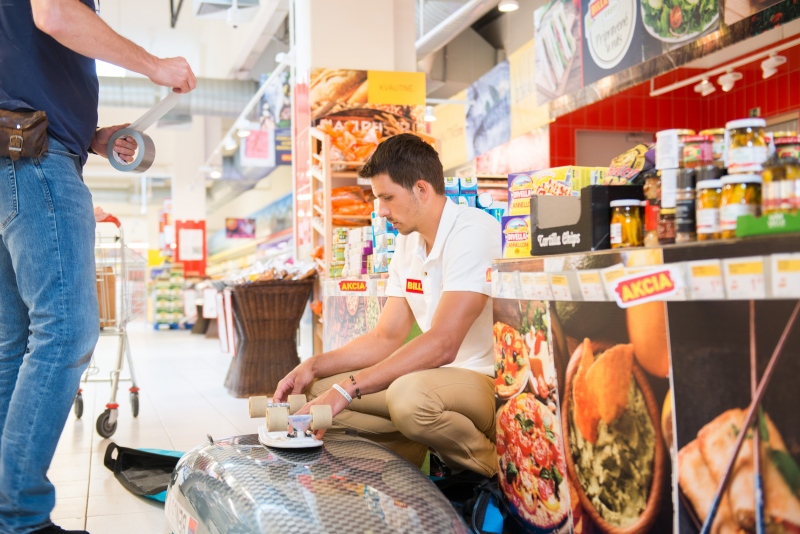 Three hours of video shooting and tranfering in a boat, all during the opening hours of the store. That’s what shooting of two videos looked like for silver olympic medal holder, water slalom racer Matej Beňuš. The videos were made for his platinum partner – the BILLA company.

Even though Matej Beňuš is known for liking unconventional challenges, the shooting was almost unimaginable for him. Unlike the preparation, the actual shooting took only a few hours. Only comig up with the system of moving through the store full of people on a boat took a few days. The film crew knew that it would be complicated when they saw the store. Canoe weights less than 10 kilograms, but is three and a half metre long and needs a lot of space when it comes to turning with it which is almost impossible among the store shelfs.

“We were trying to come up with the simplest solution. So I spent as little time in the canoe as possible, because moving in such a long boat in the store would be risky both for me and the customers,“ says the water slalom racer.

Matej was moving thanks to a chair with wheels most of the time, which replaced the canoe at the time. This way, the film crew avoided any possible damage of Beňuš’s canoe. He was sitting in the canoe only for the last part of the video, when he comes to his wife. Before that he place a skateboard under the canoe so he could move with it in the store. „The way of moving with the boat was solved, but for me it was about keeping the balance and, moreover, they wanted me to make it look natural,“ says Beňuš, smiling.

Videos for the fanpage

Videos in which Matej shops from the boat were shooted for his facebook fanpage. „Matej is not only a big professional, but also an entertainer, and nothing is impossible for him. Not even paddling in the grocery store. His idea to take pictures and to shoot videos in one of our stores entertained us and gave us a hard time at once. We are proud that Matej collaborates with Billa and we are glad he likes shopping at Billa. That’s why we accepted his funny activities as a challenge and now we are glad we made them happen.,“ says Denisa Pernicová, the BILLA Slovensko marketing director.

Curiosities from the shooting:
The most time was spent on shooting the first scene, in which he picks the lemons – 30 minutes.
The least time was spent on shooting the scene in which he passes the dairy products.
The most complicated was to shoot the end of the video, when Matej sits in the canoe. He had to be careful to keep the balance and not to damage the boat.
The shooting took place during the opening hours without any limitations, in the BILLA headquaters on Bajkalská street in Bratislava.